Pupil Transportation: Costs Versus Savings of Going Green With Propane 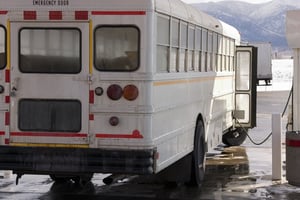 It’s no secret that school districts across North America are looking into alternative fuels for their pupil transportation, not only to minimize negative impact on the environment, but also to save money. While a majority of school buses are still powered by diesel, more and more districts are shifting to propane.

Propane is not the only alternative to standard diesel fuel. Biodiesel, which is generally made from domestically produced soybean oil, recycled cooking oil, or animal fats which are blended with petroleum diesel, is still the most commonly used alternative fuel.

The Cost of Switching to Propane

When considering an alternative fuel source, districts must not only think of the costs involved with retrofitting their fleet or purchasing new buses, but also the expense of adding a fueling infrastructure. Propane powered buses, when purchased new, still typically run more than their diesel-powered counterparts, and get around 10% fewer miles per gallon with propane than with diesel.

As intimidating as these initial start-up costs might sound, there are also significant cost benefits to switching to diesel. It’s also important to note that propane-powered buses are rapidly improving their technology. In a U.S. Department of Energy Study, five school districts in Texas were studied after converting all or some of their fleet to propane. Though there were costs associated with the conversion, there were also significant savings.

At more than half the cost of diesel, propane is significantly less expensive. For some districts, additional tax rebates make the fuel even more cost-effective. In addition to saving money, schools that opt for propane-powered buses are minimizing the cost to the environment. Reduced emissions also make a safer environment for students with allergies or respiratory issues.

Ultimately, each district must weigh the pros and cons before making an appropriate decision regarding pupil transportation. Though propane can save money, today’s diesel buses are also less expensive to operate and more environmentally friendly than older models.

Has your school district switched to propane or another alternative fuel source? If so, what were the cost implications? Please share your comments below.