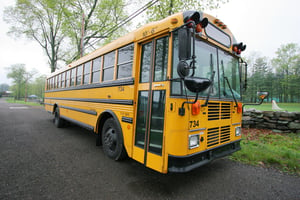 When managing a school bus transportation network, there are a lot of factors to keep track of, and sometimes it's easy to let the little things slip by. However, in the case of school bus idling, it's a little thing that adds up to big problems! Your drivers should be trained to avoid idling whenever possible and driving in such a way that minimizes the need for it.Obviously, with passengers continually embarking and disembarking, there will always be some amount of idling. However, that doesn't mean the larger issues should be ignored.

Why School Bus Idling Should Always Be Minimized

Every second a gasoline- or diesel-burning bus idles in traffic, it's pumping more pollutants into the atmosphere. That's bad in general, but it's worse in the case of school buses because they're effectively creating a cloud of pollutants which surround the children onboard.

No matter what sort of fuel your buses run on, you're wasting it when they idle - and, of course, this is worst if you're still burning traditional fuels. According to the EPA, a gas or diesel bus will go through around half a gallon of gasoline for every hour of idling. That might not sound like much, but it definitely adds up over the course of a school year.

In the cases of some electric vehicles or hybrids, it may even be more efficient to turn off the engine at long stops, rather than letting it run.

An idling bus creates a big obstacle, which can increase -or even create- traffic problems. We don't want to suggest the idling causes other motorists to ignore stop arms or otherwise behave in unsafe ways, but a lack of idling buses definitely gives them few opportunities to endanger the student passengers.

How to Reduce School Bus Idling

There's a genuinely simple trick to reducing idling, one which any district could implement easily with the right route-mapping: Never turn left.

Major shipping companies like UPS reworked their maps and routes to eliminate left-hand turns and the results were dramatic: they cut miles off their routes, reduced gas usage, and slashed carbon emissions as well. When large vehicles never wait around for opportunities to turn left, it creates real savings.

Need help making it happen? BusBoss is the country's premiere routing software designed specifically for school buses. Contact us for a free demo!