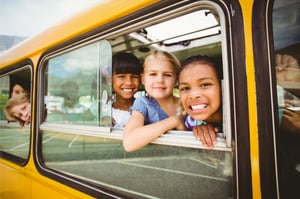 In a recent webinar, the President of ROUSH CleanTech, Todd Mouw, made a bold proclamation: "Propane [in school buses] is going to be the lead horse for the next decade," referring to its status as the most commonly used alt fuel. ROUSH CleanTech provides a variety of alt-fuel vehicles and conversion systems, so he doesn't have a horse in this race, so to speak. As one of the major players in this field, he would be in a position to know which alt-fuels were leading.

Most people in the industry - including Mouw - believe that electric vehicles will eventually become dominant in the school bus industry. However, that day is at least a decade off, possibly more. In the meantime, a fuel is needed to bridge the gap between gasoline and pure electric buses.

Is propane that bridge?

Why the School Bus Industry Is Coming to Embrace Propane

There are numerous benefits to propane.

Propane is among the most clean-burning fuels available, releasing very little carbon or other harmful pollutants into the atmosphere.

2. Propane Has Twice the Energy Content as Natural Gas

One cubic foot of propane contains 2,516 BTU, while one cubic foot of natural gas only has 1,030 BTU. With propane, you literally get more bang for your buck. It also has a higher octane rating than gasoline (~110 vs ~90), allowing for more efficient engines.

3. Propane Is Heavier Than Air

In the rare event that a gaseous propane tank leaks, the leak won't go into the atmosphere - unlike natural gas. It's heavier than air, so it will sink to the ground and dissipate quickly.

4. Propane Is Abundant in the US

Technically, propane is a form of fossil fuel, because it's created during the process of refining natural gas. However, the US possesses vast reserves of natural gas, and it's far less environmentally disruptive to acquire, compared to gasoline or diesel. This will keep propane (and natural gas) prices low for decades to come, at the least.

Because propane burns clean, it leaves far less harmful residue on engine components. Over time, this significantly reduces maintenance costs on bus engines. That's a big bonus for transportation managers looking to keep their budgets as low as possible.

Is Propane Coming Soon to a School Bus Near You?

The school bus industry is aware that gasoline and diesel are on the way out, and propane is increasingly looking like the best all-around alternative while we wait for all-electric engines to become standard.

Would your district have any interest in embracing propane? What sort of conversations are you having within your district? Let's chat in the comments below.