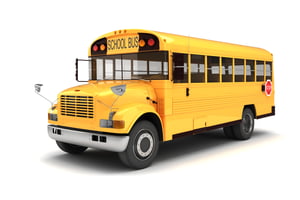 On June 17, 2019, FPSD officially brought their first electric school bus online in a full-on ceremony that included the mayor and the school marching band. This wasn't the first time FPSD embraced eco-friendly technology. In fact, they've made something of a name for themselves in this area. Their campus includes a farm for growing local produce, as well as several arrays of solar panels producing electricity.

So it's only natural that they would start looking at electric buses!

Better yet, they were able to get substantial financial help. One grant, from the TransAlta Centralia Coal Transition, mostly paid for the bus itself. Another grant paid for the recharging station. Very little of the money came out of their pockets.

According to FPSD officials, two of the most attractive elements of the electric bus are its lack of air pollution - and also its lack of noise pollution. Electric buses are extremely quiet, and that is a selling point which often goes overlooked. Quiet buses are more conducive to students studying on the bus, or just keeping noise levels low in general.

Another consideration is that FPSD is relatively small (approximately 14 square miles) and on a very flat piece of terrain. This is important to keep in mind. While current electric buses are far more powerful than they might have been a few years ago, they do still struggle to keep up with other alternative-fuel vehicles such as those running on natural gas. A flat district is perfect for electric buses since that means they won't have to go uphill so often - a task electric buses can still struggle with.

However, this isn't a consideration for FPSD, and hopefully, they will have a lot of success with their new bus!

The push for more eco-friendly school buses is only getting stronger - and viable electric buses give districts yet another upgrade path.

Would your district ever be interested in switching to electric? Let us know in the comments below!