published on November 18, 2019 by Sonia Mastros 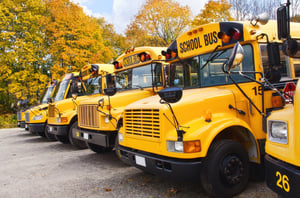 Is it time to think about buying into electric school buses? There's still a lot to consider.

Why Your District Should Consider Electric School Buses

The biggest single benefit to electric buses is, of course, how environmentally-friendly they are. There are simply no emissions to worry about, and they are also extremely quiet - so they don't add to noise pollution. This, of course, significantly improves air quality in a district, while protecting students' health.

One major drawback to propane, CNG, and other physical alt-fuels is that the district needs a source for those fuels. That's not the case with electric buses! Since they can be plugged directly into the local power grid, there's no need to source fuel. Ambitious districts might even set up solar panels to generate free power for their buses.

Why You Shouldn't Consider Electric Buses

Unfortunately, there are two major drawbacks that still have to be dealt with.

As of writing (October 2019), the maximum range of any electric school bus on the market is up to 150 miles, but the lowest is only around 70. For some districts, that's still going to be cutting things too close, especially as costs go up with the size of the battery.

There's no sugar-coating this one: Electric school buses start at approximately 2x the price of other buses, and that can go up to 3x for models with huge batteries. This, by itself, puts them out of reach of a great many districts. Although prices will keep coming down over time.

Has your district considered electric school buses? What did the cost-benefit breakdown look like? Let us know below!