published on November 20, 2019 by Sonia Mastros 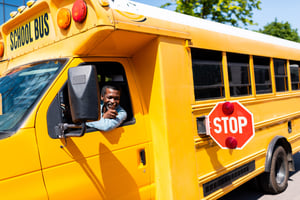 Across the country, one of the biggest challenges facing district transportation directors is simply one of staffing. The nationwide school bus driver shortage continues in full swing, with the majority of districts reporting that they lack all the drivers they want.

However, School Transportation News is now reporting on a recruitment plan pioneered by Bryan ISD in Texas which is simple, straightforward and - so far - successful: Paying new workers for school bus driver training aimed at getting their Commercial Driver's License (CDL).

Districts might balk at the expense, but if Bryan ISD's plan is any indication, this may be one of the best ideas yet for increasing the ranks of bus drivers.

Will Your District Start Paying for School Bus Driver Training?

The Bryan ISD method has three basic components to it.

1. Rather than attempting to reach out to existing CDL drivers, they specifically targeted people looking for a new career, emphasizing "no experience necessary" in their job ads.

2. They created special curriculum and classes designed to help teach newcomers everything they need to do to learn to drive a bus and get their CDL, making the overall process as simple as possible.

3. They hire these newcomers as district workers from the outset and pay them $11/hr for attending the training classes and all other relevant work towards becoming licensed.

The results speak for themselves: In the span of a single summer, Bryan ISD went from a 30% driver shortfall to being fully staffed. Not only are all their routes covered, but they're also training backup drivers.

Is There a Downside to the Bryan Plan?

On the face of it, this seems like as good an idea as anyone has had for boosting their ranks of drivers. Based on our own experience in the industry, though, there are a couple of potential issues that districts will need to watch out for.

First, good candidate screening is a must. Districts will need to be relatively certain that the people they're hiring will actually go all the way through training and successfully get their license. If they don't get their license, that money is wasted.

There's also the issue of ongoing employee retention. Bryan ISD is putting a lot of resources into training these new hires - and it's not hard to imagine other districts trying to poach their drivers. It seems likely that, going forward, Bryan will need to put substantial work into keeping morale and job satisfaction high.

However, these are both solvable issues, as long as a district plans carefully.

So, what do you think? Is paying for school bus driver training going to get us out of the driver shortage? Let's talk about it in the comments.