published on December 07, 2018 by Sonia Mastros 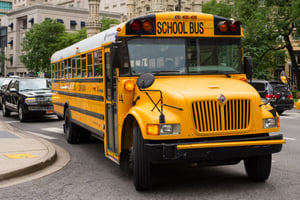 On Tuesday, September 4, 2018, the West Mifflin, Pennsylvania, police department received a disturbing complaint. Two middle school girls were alleging that their school bus driver had committed "inappropriate actions" towards them, which were implied to be sexual in nature. Normally, an accusation of this nature - by itself - is enough to ruin careers, but the driver had the truth on their side: truth backed up by school bus video!

The truth was that no such inappropriate actions occurred, and this was proven by the bus's on board video cameras. The driver was completely exonerated, and spared having his life ruined by a preteen prank.

This story illustrates how beneficial school bus video cameras can be to everyone who is on board a bus, the drivers included! If your own drivers are nervous about the idea of being on-camera, remind them that cameras can save careers.

We understand, bus drivers enjoy their autonomy and dislike the idea of being constantly monitored. That makes it all the more important to emphasize how video cameras can help everyone, drivers included.

The obvious example are cases such as this recent incident in West Mifflin, or a Whitesboro, New York, driver who was accused last year of driving while intoxicated. Video evidence disproved the charges against them.

However, video cameras can also be a great help in more mundane matters, such as disputes over disciplinary action. Any bus driver has, at some time or another, found themselves at odds with a parent who refuses to believe their child was misbehaving on the bus. All too often, this turns into a "he said/she said" situation where the driver cannot prove their claims.

But now they can. If a parent refuses to accept disciplinary action, they can be shown the video of the incident in question. This will resolve the issue for all but the most intractable of parents.

These videos can also be useful for dealing with school administration, such as a driver requesting upgrades to their bus. Video can be used to demonstrate the need with a lot more credibility than the bus driver's word alone. If the driver has a legitimate complaint or request, the video will be compelling evidence.

School bus video cameras really are a boon to everyone on the bus. They keep everyone safe - and honest - with very few drawbacks. If you're receiving push back on your own camera initiative, keep this in mind.

Have you heard any other good stories lately of video cameras helping out bus drivers? Let's share them in the comments below!