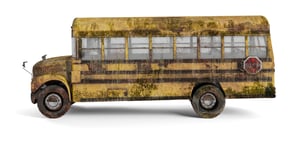 There are many aspects of school bus safety that a district transportation manager must oversee, but one of the most critical is implementing measures to prevent onboard fires. Fires on school buses are more common than people realize. In fact, the DOT estimates that one or two fires happen every school day.  Fortunately, most of these happen when students aren't onboard, but tragedies do occasionally happen. On average, 22 people are hurt or killed every year by bus fires.

Even if the chances of fatality are low, a district should do everything possible to reduce the chances of fire. After all, even if no one is harmed, a fire can easily destroy a bus - leading to huge repair or replacement costs.

Here are some suggestions for fire-proofing your school buses.

Fire suppression is generally considered too expensive for most districts to put systems onto all their buses, but think hard about installing them on your special needs buses. Disabled students will be the most vulnerable if a fire breaks out, particularly those in wheelchairs. It's a valuable insurance policy, even if it merely brings peace of mind to drivers and parents.

2. Always Have Fire Extinguishers Onboard

This should go without saying, but always have fire extinguishers onboard - optimally, in both the front and the rear of the bus. Check their operational dates regularly, and promptly replace any which are too old to be considered reliable.

Your drivers should be doing this anyway, but pre-drive inspections are particularly vital for preventing fires. If there's a small leak in flammable fluids, it will be most evident in the morning after pools have had time to form beneath the bus.

Along with visual inspections before a bus ride, drivers should also give their bus a smell test after the ride. Many potential causes of onboard fires - including leaking fluids or shorted electronics - will produce distinct "burning" smells. These should never be ignored, as they're an early warning that something under the hood is combusting when it shouldn't.

Generally speaking, rear-engine buses are considerably more prone to fire than front-engine models. Worse, that means the fire will start beneath students, far away from the driver. When it's time to upgrade your fleet, consider moving towards front-engine buses for the sake of safety.

How does your district mitigate the chance of fire? Let's share strategies in the comments below!