published on September 03, 2020 by Sonia Mastros 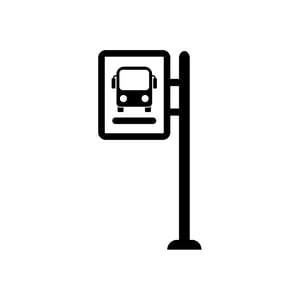 Schools reopening this fall are almost certainly going to be making significant changes to their buses and routing, in response to the COVID-19 coronavirus. If these changes are going to involve adding new bus stops - such as to prevent too many students from congregating at the same stop - school bus safety must be given a high priority! New stops should be chosen based on how safe they will be for students to utilize when getting on and off the bus.

BusBoss specializes in helping districts implement better bus routing and tracking, so we've got some important tips to consider when adding stops.

Children crossing a road is always going to be a major source of danger and should be avoided whenever possible. Bus stops should be chosen so that students don't have to cross, and it's worth having the bus go slightly out of its way to accomplish this.

2. Stop On Roads With Sidewalks

Whenever possible, a bus stop should be on a portion of the road with a publicly accessible sidewalk or other pedestrian paths, so that students immediately have somewhere to walk that is out of the way of traffic.

3. Avoid Left Turns in Your Routing

Buses are most vulnerable when taking left turns, and more open to being hit by oncoming traffic. Moreover, eliminating left turns can actually save fuel! Major courier services like UPS specifically avoid left turns for this reason. It might be counter-intuitive, but driving around a block to avoid a left turn will - over time - waste less fuel than constantly sitting at stoplights waiting for protected turns.

4. Do a Visibility Check Before Committing to a New Stop

Modern bus routing software can generate new routes within seconds, but they are simply optimizing based on map data. That doesn't mean the stops are actually a good idea, based on real-world variables. Any potential stop should be checked to ensure high visibility in both directions, as well as being well-lit when it's still dark out.

5. Avoid Backing Up If at All Possible

Backing up in a school bus is always a dangerous maneuver, due to poor visibility from the driver's seat. Don't add a stop that will require backing up unless there is truly no other option.

6. Try to Pick Stops Which Are Shielded From the Weather

Finally, think about sub-optimal weather conditions. Will the students have shelter from the rain or snow? Shade during high-heat summer days? Could the bus stop become snowed-over? Weather is hard to predict, but it's a critical factor to consider.

What tricks does your district use to ensure passenger safety at bus stops? Let us know in the comments!