published on September 11, 2019 by Sonia Mastros 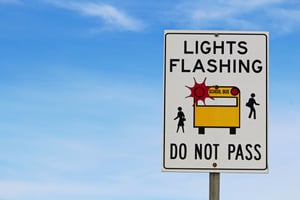 In general, school bus safety laws across the nation have been increasingly strict and concerned with protecting child riders from other motorists - except for one strange anomaly last year. In July 2018, the state of Georgia amended its school bus passing laws in a way which seemingly increased the situations under which motorists were allowed to ignore a school bus stop arm, with wording that many criticized as being unclear.

Now, fortunately, the changes have been reversed and Georgia's bus passing laws are again roughly in line with other states. What happened? Let's take a look.

The law passed in 2018 was controversial at the time. Previously, Georgia's laws on passing a school bus with its stop arm deployed were clear:only when cars are in opposite lanes, and there is either a solid barrier or a grass median separating the two traffic directions. This is how most states handle the issue.

However, the new law amended that to add a third exception: when there was a turning lane present in between the opposite flow of traffic.

Presumably the authors of the bill assumed that a turning lane would create the same barrier to oncoming traffic that a physical barrier or grass median would. However, not all turning lanes are the same, and there were constant questions such as how close the bus needed to be to the turning lane for the exception to be invoked.

The fears of those who opposed this law were seemingly validated when Georgia saw two major incidents of children being hit by passing motorists, including one fatality. This brought about a strong push to have the law changed back to the previous wording, with very few voices standing opposed.

Now, as of February 2019, the law has been amended. The "passing lane" exception has been removed, and once again, only physical barriers or grass medians are valid reasons for oncoming traffic to ignore a school bus stop arm.

Wording Matters When It Comes To School Bus Safety Laws

This entire situation illustrates how important it is that state legislators carefully consider the impact of their words when making any changes to laws covering school bus safety. The changes to Georgia's laws should have never been passed and signed in the first place, but we can at least be thankful they were changed relatively quickly.

Hopefully, in the future, other states will take heed from this cautionary tale and show restraint when tempted to reduce school bus safety on the road.

What do you think? How can we prevent our own legislators from making similar mistakes in the future? Let's discuss it in the comments below.