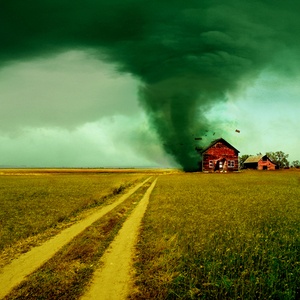 Proper training of school bus drivers means preparing them for as many on-road eventualities as possible, including ones which are relatively rare. One of the rarest – but most dangerous – is the possibility of one or more buses being on their routes when tornadoes appear in the skies.

Although the threat is greatest in “tornado alley,” comprising the Southeast as well as much of the Midwest, the truth is that no state in the U.S. is 100% free of tornadoes. Even Alaska has seen a few! No matter where you are, your bus drivers should be trained to handle tornadoes, just in case.

More so than in many other emergency situations, it’s vital that drivers keep control of their emotions. Their voices should remain steady and their physical movements controlled, to avoid encouraging panic among students.

2 - Know the route and terrain

In many cases, it will fall on the driver to find a safe place that provides shelter from the storm. If they are close to their school, the best option is often simply to drive back and use the school to shelter their students until the storm passes, then resume their routes.

If that’s not an option, though, the driver will have to be creative. Do they know any buildings which are rated as storm/attack shelters? Do they know any parents along the route with particularly thick basements? The better their understanding of their route, the more chances they’ll have to find proper shelter.

Failing that, they will need to find a flat piece of land with few potential sources of debris, such as trees or power poles. Never attempt to shelter beneath an overpass.

The district can potentially assist their drivers by identifying suitable shelters and making agreements with the owners (in writing) that their buildings can be used in the event of an emergency. This is strongly recommended for districts in tornado alley in particular.

Circumstances may knock out communications, but if at all possible, the driver should be constantly in radio or cell phone contact with their districts. They can offer updates on the situation and receive feedback and suggested actions.

Should the students need to disembark to a shelter, the driver must still continue counting heads and maintaining responsibility for the students in their care.

Does your district have any special policies or procedures for training school bus drivers on tornadoes? Let us know in the comments below.