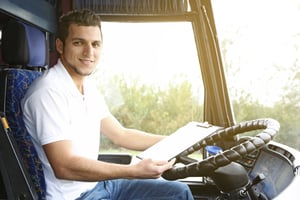 School districts around the nation continue to suffer from the school bus driver shortage, with no relief in sight. It may even be getting worse. In a recent online poll of School Transportation News readers, an astounding eighty-four percent of districts reported that they were short of bus drivers.

This has led to districts in numerous states, including Indiana, Ohio, and Virginia, to consider a somewhat radical idea: Pushing their district teachers towards getting a CDL and picking up bus routes before and after school. One district in Ohio, Weathersfield, has even gone one step further and now requires any non-teaching positions, including cooks and custodians, to acquire a CDL so that they can be used as bus drivers.

It's easy to see why districts might start looking towards their own employees as a way around the school bus driver shortage, but this seems like an idea which could cause more problems than it solves - particularly when talking about teachers.

Should Teachers Be Encouraged to Become Bus Drivers?

The biggest objection to the idea of pushing teachers into becoming bus drivers would be the concern that it would reduce the quality of their teaching. This, while technically speculative, seems hard to get around.

It is genuinely impossible to imagine a teacher being able to effectively teach while on a schedule like that. Not to mention the very real possibility of burn-out, particularly if they feel compelled to spend their weekends doing all the work they can no longer do during the week.

One would also worry about whether such a teacher would be getting adequate sleep. They would have to go to bed at 9 p.m., one hour after getting home, to get the recommended eight hours' sleep before getting up in the morning. It seems practically unavoidable that they would be sleep-deprived.

And who would want their children being driven by someone who is chronically low on sleep?

The school bus driver shortage is a big problem, particularly given Federal requirements mandating busing. However, to us, this practice seems borderline cannibalistic. It runs a huge risk of burning out teachers, lowering educational standards, and, possibly, even endangering students being driven by people who are simply stretched too thin.

Just about any other solution has to be better than that.

What do you think? This is a hard problem; let's talk about it below.