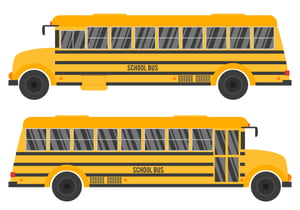 here is no doubt that the most dangerous time for any student riding the bus is when they are getting on and off the bus. The entire perimeter around the bus has been dubbed the "danger zone" due to how exposed students are. So, one major focus of school bus safety initiatives has been to find ways to make that danger zone less dangerous.

Now, we may be a lot closer to that goal than ever before. One of the leading bus technology vendors, Safe Fleet, has announced a new series of products all aimed at protecting students near the bus's perimeter.

Nothing will make the danger zone 100% safe, but if Safe Fleet's new products live up to their sales pitch, they will substantially improve school bus safety.

Safe Fleet's new initiative is a three-piece suite of products all intended to work together to improve perimeter safety.

Going a step beyond simple stop-arm cameras, this new stop arm integrates cameras and radar to watch the area directly to the side of the bus. Predictive AI immediately alerts the driver and students via audible warnings, if it spots a car that seems likely to violate the stop arm.

This is a suite of cameras and sensors focused on the right-hand side, where the doors are located. Much like the predictive stop arm, the bus maintains continual surveillance of the danger zone and the area directly behind it, analyzing driver behavior and issuing alerts if one is behaving dangerously.

Finally, for good measure, Safe Fleet has a suite of motion- and audio-detection sensors all around the bus's perimeter, enhancing the data-collection capabilities of the other systems. This is the backup system, intended to spot any threats that manage to avoid the other protective technologies.

In terms of all-around monitoring, this is as good a setup as we've seen. In particular, empowering the AI to audibly alert students to danger is a good idea. A predictive AI is going to have much better reaction times than a human driver, so it can issue the alert earlier in the process. Even if there's the occasional false alarm, that's much better than the alternative.

At BusBoss, we love seeing all the new technologies being deployed to help keep student riders safe. Of course, the one X factor is price - this sort of monitoring won't be cheap, at least at first.

Still, if the price was within your budget, would you be willing to let an AI watch out for student safety?