Roadblocks to Driver Recruitment and Retention

published on September 15, 2017 by Sonia Mastros 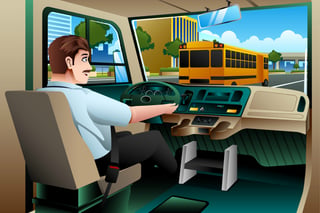 The school bus driver shortage isn't getting any better. In recent nationwide surveys of school districts, nearly all reported difficulty in maintaining driver staffing levels and roughly 30 percent described their shortage as "severe or desperate." Many schools are beginning to have to take truly drastic action, even cutting services, due to their problems with driver recruitment and driver retention.

Driver recruitment is a challenge and the reality is that there is a severe labor shortage. Schools that want to see sustainable levels of bus driver employment need to understand why. From the perspective of a potential bus driver, there are many barriers to entry which often cause them to pursue other career paths. Understanding and trying to overcome these barriers will help you see better school bus driver retention.

It's true that many bus drivers are paid in the area of $15/hr, which is significantly above minimum wage. The problem is the hours. School bus driving is strictly part-time work, which requires them to be available very early in the morning, around 4-8 a.m., as well as in the middle of the afternoon, around 2-6 p.m..

These hours make it extremely difficult for a driver to find a second job. Unless they can live on part-time wages, this creates a major barrier to a school bus driving career.

Compounding the lack of a livable wage is the lack of standard benefits. Many drivers don't qualify for medical, dental, retirement, or other similar plans. Combined with the pay/hours issue above, this makes bus driving an unacceptable solution for a large number of people who might otherwise be qualified.

Day after day, bus drivers are directly responsible for the lives of dozens of children. That's a form of stress which simply cannot be disregarded, particularly since you want conscientious bus drivers who legitimately care about their passengers. Often, that stress is compounded by aging bus fleets without more modern safeguards, which do little to increase their sense that they can genuinely protect the children onboard.

In many districts, the bus driver gets thrown under the proverbial bus whenever a conflict with a parent occurs, particularly where discipline is concerned. In worst-cases, this can lead to the perception of a true "no-win" scenario - they're handcuffed by parental threats of a lawsuit from disciplining or controlling students who may represent legitimate driving hazards. Is it any wonder school bus driver retention is low among drivers in this situation?

Improve Your Driver Outlook With BusBoss

The BusBoss series of products are designed to simultaneously reduce your own operating costs while also offering drivers better and easier tools to do their jobs. Contact BusBoss today for a free consultation on your transportation system optimization!

How is your district working to retain and recruit drivers? Please let us know in the comments below!