published on September 30, 2019 by Sonia Mastros 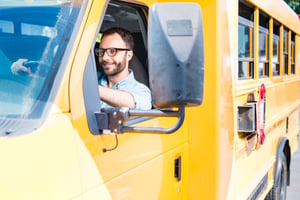 All school bus drivers will spend plenty of time in training sessions throughout their career, with much of it mandated by local or state laws. However, sometimes you may have one or more drivers who need more intensive retraining to get them back on track. This can be a tricky proposition because retraining carries a stigma, and can easily be seen as punitive or threatening.

In other situations, that might not be so much of a problem - but with the school bus driver shortage still a major issue, you really need to retain the drivers you have! As such, it's important to conduct your retraining sessions in ways that maximize their potential to improve driver performance, without causing any new problems.

1. Keep It as Positive as Possible

Try to avoid any language that makes the retraining session feel punitive. Keep your wording and messaging positive. It's not punishment; it's an opportunity for improvement and advancement.

In particular, even if the driver is genuinely on their last chance, avoid saying anything that implies their job is on the line. This will only stress them out, or even anger them.

We've occasionally seen districts try to "cover up" targeted retraining by turning it into a large-scale training session. However, this rarely works - most drivers will know exactly why they're there and be resentful of it. Also, retraining should be kept intimate specifically to help keep the focus on the driver(s) who need help.

An ideal situation is when 2-3 drivers all have similar issues, which can be dealt with in a group that's small enough to allow personalized training, but without the intimidation that can come with one-on-one sessions.

3. Whenever Possible, Use Video

The target of the retraining session may not even realize they have been doing anything wrong. In these cases, video is a huge aid in training them. Very often, simply watching a video of their performance - seeing themselves from an outside perspective - will help them understand where they went wrong.

Otherwise, if the driver refuses to admit mistakes (or only does so under coercion) the retraining will probably not be effective.

With a retraining session, you're not trying to overhaul the driver's entire performance - you're targeting the most serious problems which are occurring. So try to keep the focus on one or two key issues, and don't stray too far from them. Otherwise, the session could become overwhelming, or lead the driver to misunderstand which behavior(s) are most problematic.

Does your district have any great tricks for retraining school bus drivers? Let us know in the comments!