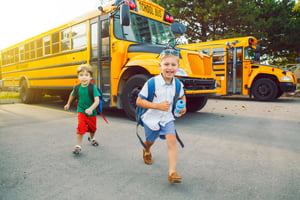 Without a doubt, one of the most serious threats to school bus safety is the problem of other drivers ignoring the stop arm. Every time a car blows by the stop-arm sign, they endanger students who are getting on and off the bus, with injuries or deaths occurring every year. Statistics show that there are tens of thousands of such violations every day, and each has the potential to be deadly.

So, states are seeking solutions, passing laws to try to curb this rampant issue. Ohio has become the latest, with a bill simply called the School Bus Safety Act (SB-134). However, its impact could be far-ranging across the state, and potentially a model for legislation to come - if it passes.

Distilled, the School Bus Safety Act would do three things:

1. It creates a new category of offense specifically for injuries or deaths caused by ignoring stop-arm cameras, with significantly higher penalties for convicted drivers.

2. It officially authorizes districts across the state to utilize stop-arm cameras in enforcing this law.

In this, the bill is fairly similar to other bills introduced in recent years, although the addition of state funding for the cameras is somewhat unique.  Otherwise, states such as New York are already experimenting with higher penalties for violations.

The big issue with such bills is that, so far, there is very little hard evidence to suggest that increasing stop-arm camera enforcement creates a significant deterrent.  Reportedly, the National Highway Transportation Safety Board (NHTSB) has been studying the matter since 2015, but so far they have not released their data, meaning that many of these laws are being passed in a data vacuum.

In general, it is hard to link increased penalties with decreases in crime. This is a particularly important issue when talking about bus safety. Sure, the Ohio bill would put drivers in prison for longer if they kill a child - but that child is still dead. Solid preventative measures are called for to prevent such accidents from happening in the first place, and the data isn't there to support this.

There's also the worrisome possibility that cities or states could become reliant on stop-arm violations as a source of income, much as they are with other traffic violations, which would effectively incentivize the states to not prevent violations.

We remain unconvinced that harsh stop-arm camera enforcement is necessarily the answer, but what do you think? Do you have numbers from any districts already using stop-arm cameras? Let's talk in the comments.