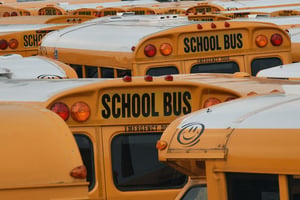 In December of 2017, a truly horrific school bus accident occurred in Oakland, Iowa. A fire broke out in the engine compartment of a bus, sending dangerous fumes into the bus interior, and ultimately taking the lives of both the driver and a 16-year-old student.

After more than a year of investigation, the National Transportation Safety Board (NTSB) has issued a series of recommendations to improve school bus safety - and these are raising some eyebrows across the education sector. Their own report had 10 separate recommendations, but let's focus on the three most impactful.

Looking at New School Bus Safety Recommendations From the NTSB

One primary concern of the investigation was determining a cause of the fire, but this proved to be ambiguous. They identified a few potential scenarios, but could not definitively prove one. So, most of their recommendations focus on factors aside from the start of the fire.

In their determination, the #1 factor which caused fatalities in that accident was that the driver was physically unfit. He was 74 years old, and suffered chronic back pain. He was apparently unable to exit the bus on his own. In fact, it appears that the student died specifically because she was attempting to help him escape, rather than saving herself.

So, the NTSB recommends districts be more proactive about enforcing physical fitness requirements. However, with the bus driver shortage still a factor, this may be easier said than done.

2. All buses should have fire suppression systems within the engine compartment.

The NTSB found that the fatalities could have been avoided, if there had been a fire suppression system in place. So, they recommend all buses on the road to be retrofitted to include such systems.

This is reasonable enough, but the problem is cost. Major fleet retrofits will almost certainly require outside aid if districts are to afford them.

3. Buses should have better "firewalls" between the engine and the passengers.

The other finding was that the bus passengers did not succumb to fire, but to fumes. Better shielding between the engine and the interior could have prevented this, or given them more time to escape.

However, this may not be a practical suggestion, at least for retrofits. The bulkheads involved would need to be heavily re-engineered, potentially even past the point of still being under warranty. Such upgrades may have to wait for future generations of new school buses.

How to Prevent Bus Fires?

Fire prevention is a critical aspect of school bus safety - but how can it be realistically accomplished? What do you think? Let's talk about it in the comments below.