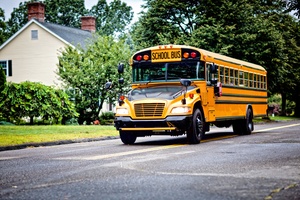 For the past decade, many school districts have shown increasing interest in switching to alternative fuel systems. On paper, the benefits are clear: they’d see lower fuel prices and easier maintenance while also reducing the harm their fleet does to the environment. Unfortunately, these projects often seem to fall short.

Gas/electric hybrids haven’t gained much traction at all, and those few districts which have experimented with hybrids have seen disappointing results: lower miles-per-gallon than expected and often with other performance issues as well. The general attitude has been that a district looking to “go green” would be better served using systems running dedicated alt-fuels such as natural gas.

However, that may change. An experiment involving New York school buses is underway, utilizing gas/hybrid conversion kits. So far, the results are promising and may herald a new option for districts seeking affordable alt-fuel options.

Are New York School Buses Paving the Way for Hybrids?

According to School Transportation News, one of New York’s longest-serving bus contractors, Careful Bus of Brooklyn has begun installing XLH conversion kits from XL Fleet on a number of their buses. Careful Bus is family-owned and has been running routes across the five boroughs for nearly fifty years, putting them in an excellent position to try out the new technology.

So far, the results have been quite encouraging. According to Careful Bus, they’ve seen a 25% increase in fuel efficiency as well as 20% longer lifespans in their front brakes. They’ve also realized significant reductions in pollution.

Better yet, these kits are relatively affordable and easy to install. It only takes approximately one day for a mechanic to retrofit a bus with the system. This makes it one of the most painless options for converting existing diesel buses to an alternative fuel system. Once in place, Careful Bus’s drivers are seeing minimal changes to their buses’ performance and handling.

Assuming these results are long-term, it could mean good things for districts looking for an affordable alt-fuel system. The main question is whether non-urban districts would see similar gains. New York City is well known for its start-and-stop traffic, for which electric hybrid systems are effective. Districts without numerous stoplights may not see the same gains.

It’s an exciting development – and we’re always happy to see new ideas in alternative fuels making their way into school bus fleets. What do you think? Would you consider installing hybrid conversion kits on your buses, if they’d be able to quickly show a return on the investment? Let’s talk about it below!