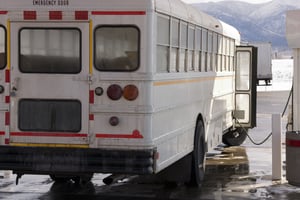 Is your district starting to think about alternative school bus fuels? They’re becoming more common, and an increasing number of major bus manufacturers are pushing their alt-fuel designs. Plus, states such as Texas are now beginning to offer rebates and other incentives for buses that move away from diesel and towards other options.

It’s a complicated topic, but we wanted to share some of the major advantages and disadvantages of various potential school bus fuels.

As things stand, there are still reasons to stick to diesel. The best reason is it’s available everywhere and easily-obtained. Most other alternative fuels will require some measure of creativity in procurement. Also, it’s the most established and safe choice.

On the other hand, the damage fossil fuels do to the environment are well-known, and diesel engines can require more maintenance than other engines.

Right now, choices in electric buses are slim. There aren’t many offered and those that exist face hurdles in terms of having enough power to move a full Class-C bus. The idea of being able to simply “plug in” to refuel a bus is attractive, but right now, it’s probably not a viable option.

Plus, that power has to come from somewhere. If your local electric plant is still burning coal, you aren't actually decreasing fossil fuel use.

Propane is a very attractive option for schools looking to move away from gasoline, as well as being one of the most popular alt-fuels for bus fleets. It’s a reliable and well-proven energy source and offers good fuel efficiency. It’s also non-toxic and non-polluting: Propane is effectively considered impossible to “spill” because it evaporates immediately. On top of that, it’s very clean-burning and can decrease the need for engine maintenance.

The only major downside is procuring enough fuel for your fleet, but propane is common enough that it’s not too hard to get supplies.

Currently, CNG is the other major player in alternative school bus fuels. Its properties are similar to propane; it’s energy-efficient, clean-burning, and nearly impossible to spill. On top of that, America has vast deposits of natural gas; some of the biggest in the world. It might not be renewable, but we won’t be running out anytime soon. This also makes procurement less of an issue.

Would Your District Embrace Alternative Fuels?

The pressure to move away from petroleum is growing, while both private and state interests are adding incentives to embrace alternative school bus fuels. Is it working? What would it take to convince your district to move away from gasoline?

Let’s talk about it in the comments below!