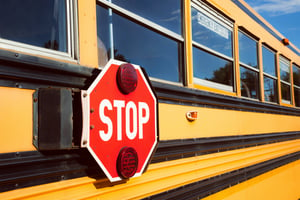 More than 20 states in the United States allow school districts to install stop-arm cameras on their buses - and Kentucky may be the next to join them. House Bill 189 recently passed the state House, and it seems likely to go on to become law in the near future.

Stop-arm cameras are a popular measure for increasing school bus safety, by penalizing drivers who illegally pass school buses while they are stopped. Children are endangered every time a driver ignores the stop sign, so cutting down on illegal passing is a priority for districts.

Kentucky's bill is somewhat unusual in that it would mandate the use of stop-arm cameras, rather than leaving it to the discretion of individual districts. As currently written, this is an unfunded mandate - leaving districts wondering where the money for the often-expensive upgrades will come from. In addition, the bill has relatively low penalties for violations: $300 for first-time offenders, $500 for subsequent offenses, and no provisions for revoking licenses for repeat offenders.

Are stop-arm cameras actually a good idea? There are pros and cons to the question which should be considered before a district - or a state - decides to utilize them.

The primary advantage of stop-arm cameras is that they give districts and law enforcement a clear way to track down and punish drivers who ignore stop-arms. Like traffic light cameras, pictures taken by these stop-arm cameras are admissible in court. This creates a new avenue for enforcement because previously it could be difficult to prove specific drivers violated the law.

In addition, such laws are supposed to have a deterrent factor - although the low penalties in Kentucky's case perhaps don't add enough deterrence.

On the other hand, the biggest argument against stop-arm cameras is that there's vanishingly little hard data suggesting that they truly reduce illegal passing. Companies selling stop-arm cameras will often talk about how many tickets are issued per day, but every ticket represents a crime that already happened. Most studies into the matter have been inconclusive, at best.

There's also the tricky matter of monetization. Fundamentally, stop-arm cameras mean that the district or county profits off people endangering children. This seems problematic, particularly without hard evidence that school bus safety is truly increased as a byproduct.

Plus, camera upgrades are expensive, and most districts are already hurting for money in numerous ways. This is especially troublesome in cases like Kentucky, where the mandate may be unfunded and force schools to divert already scarce resources.

What do you think? Have you seen evidence to suggest stop-arm cameras actually increase school bus safety? Or are they just another way for cities to profit from crimes? Share your opinion in the comments!