published on December 31, 2019 by Sonia Mastros 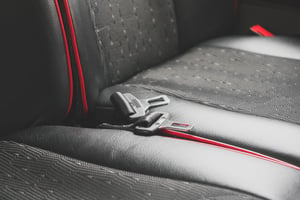 Usage of school bus seat belts is growing across the country, with six states already mandating their installation, and several others contemplating similar laws. Along with helping to keep children safe during accidents, there is also growing evidence that belts can significantly improve student behavior any time they ride. This makes a very compelling argument for belts on buses.

However, there has been one major sticking point for many: how is the bus driver supposed to police usage of the belts, especially once the route has begun? An interesting new technology from the company Intermotive called Safe-T-Seat wants to make it easier.

The Safe-T-Seat product, announced in October, appears to be an extremely robust solution to the problem of monitoring seat belt usage.

Each set of seats includes pressure sensors, as well as sensors within each belt buckle. It can track when a rider is sitting on the seat, and whether their belt is fully fastened. This information is then wirelessly relayed to the driver, who would typically be using a tablet-style computer to display a layout of the bus and which riders are properly belted or not. Audio and\or visual alarms would alert them if a rider ever unbuckles during the ride.

Intermotive also claims that the system can track and retain data, allowing for analytics, as well as more-detailed investigations into the causes of injuries should an accident occur.

On the face of it, this sounds like a major step forward, if the technology functions as intended. However, there are still a couple of issues that districts would need to be aware of if they're considering this technology.

The other big question is cost. Intermotive has not released what it would cost to upgrade a bus to use their system. However, considering it utilizes multiple sensors built into the seats, as well as wireless communications, it undoubtedly would add substantially to the price tag of a seat belt upgrade.

Still, neither of these is an insurmountable problem, and undoubtedly many districts will be looking into the new technology when it releases in 2020.

What do you think? Would this solve the problems with policing seat belt usage? What price would your district be willing to pay for upgrades? Let's talk in the comments!