published on December 02, 2019 by Sonia Mastros 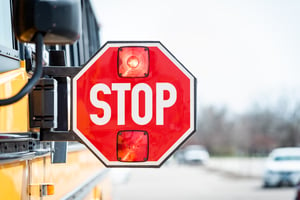 There are numerous threats to school bus safety any time a bus is on the road, but it's hard to argue against stop arm violators being the biggest threat. Every time a motorist ignores a stop arm, student lives are put at risk. This is not an uncommon occurrence: According to multiple governmental surveys, stop arm violations occur millions of times per year.

District transportation coordinators and school bus drivers need to do everything possible to reduce this number! Fortunately, you have a lot of options which can help improve school bus safety and deter stop arm violators. Individually, each of these suggestions can help, but in many cases, they may be best used in conjunction with each other.

There have been compelling arguments that one of the biggest contributors to stop arm violators is motorists simply not paying enough attention. That is, they don't notice the bus stopping in time to stop themselves, leading to a violation. In response, many districts have seen success by simply adding more and brighter warning lights to their buses. This also has the benefit of being a relatively cheap upgrade, usually only a few hundred dollars per bus.

Another common solution to the problem of stop arm violations is increased enforcement, with the addition of stop-arm cameras tied to systems which send out tickets to violators captured on camera. For this to work, however, there also needs to be a strong public outreach component. If the public isn't aware of stronger enforcement, they won't change their behavior.

We've heard anecdotal reports of a few districts partnering with police on specific bus runs, turning the bus into a sort of rolling speed trap. The extra police presence undoubtedly acts as a deterrent, but this clearly isn't something which can be done every day. Still, this sounds like it could be a good way to increase awareness of the problem.

Obviously, a bus driver needs to focus on driving. None the less, bus drivers have the power to report unsafe drivers - particularly if they get a good look at the vehicle or a partial license plate. Talk to your local PD, and consider putting procedures in place for drivers to report stop arm violations either to the district office or to the police directly.

Anything your district and drivers can do to reduce stop arm violations helps improve student safety.

Does your district have any unique ideas for deterring speeding motorists? Please share your tips in the comments below.