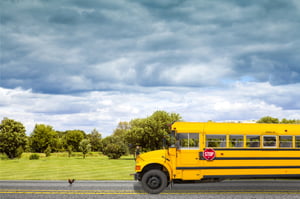 Is yellow the new green? It would be if more people knew the environmental benefits of school bus transportation!

School buses bring numerous benefits to a community, but all too often, the environmental aspects are overlooked. Buses can genuinely help reduce a community's reliance on automobiles, improve the local atmosphere, and prevent needless gasoline waste - among other positives.

This is a great topic to bring up with parents, or even students, whenever the matter of school bus transportation comes up. It can be especially useful when it's time to talk about funding upgrades for your bus fleet!

According to an analysis by the American School Bus Council, every school bus on the road does the work of 36 cars, while doing far less harm to the environment than those 36 cars would on their own. When you look at that spread across the approximately 480,000 school buses on US roads, the overall impact is genuinely impressive.

All those buses are doing the work of approximately 17 million cars. So, in a single year, US school buses prevent 62 million miles of unnecessary driving. That's 2.6 billion gallons of gasoline saved, as well as more than 56 billion pounds of carbon dioxide not sent into the atmosphere.

When a city uses school bus transportation to carry the majority of its students, that city really is helping to reduce pollution locally, as well as nationwide.

Plus, of course, some of those savings are passed directly onto parents. Every hour they aren't spending driving to and from school is that much more money they're saving on gasoline. Not to mention the benefits of being able to put those hours to better use than idling in traffic.

This Is Only the Beginning of Green Bus Transportation

The best part is, as alternative fuels become more commonplace, the environmental benefits of school buses will only grow. A bus running on electricity, propane or natural gas is incredibly clean. They produce almost no pollution at all, with the majority of their exhaust being simple water vapor.

These fuels are also much more abundant than the petroleum which goes into gasoline. In particular, here in the US, we have enough propane and natural gas to last for centuries. Peak fuel won't be a concern as more buses stop using gasoline.

So, the next time you're talking buses with parents or students, make sure they understand just how good buses are for the environment - and how much better they could be with a few upgrades!

Is your district trying to implement more eco-friendly policies? How are you pitching them to parents and staff? Let's talk tactics below!