published on November 10, 2020 by Sonia Mastros 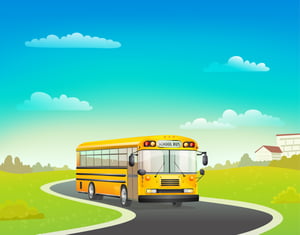 When was the last time you ran a tornado drill for a school bus?

It's a simple question, but in our experience, a lot of districts get uncomfortable when you ask it. Now, if you can answer "recently!" then that's great - but too many districts tend to focus their disaster preparedness almost entirely on the school itself. This leaves a critical school bus safety gap, if the bus is ever caught in a weather disaster or other major unpredictable event.

It's impossible to foresee every eventuality, but most districts could still implement some new safety measures and help improve student safety - and usually at a low cost.

1 - What if a fire or tornado happened at the most inconvenient time?

Nearly all fire/tornado drills are run in the middle of the day, because it won't be so disruptive to classwork. But what would happen if a tornado were to touch down at, say, 7:40AM, at the peak of traffic just before classes start?  Or what about immediately after school?  Or during football practice?

Shouldn't you occasionally run a drill to find out?  Fires and tornados don't wait for convenient times of day.

2 - Where are safe shelters along each bus route?

Most districts, understandably enough, focus their school bus routing on creating maximally efficient routes. But the question is, if a driver needed to get the bus off the road, where would be safe? A route that lacks any "exit strategy" might lead to disaster.

At the least, drive along each route and make note of potential safe zones, such as the undersides of highways.  And while you're at it...

3 - Are there any cell / radio dead zones on the route?

Always-there communications have become so common that we tend to take them for granted. However, we're still a long way from true 100% coverage. Many bus routes, particularly those going through rural areas, may easily have dead zones without cell service, or lack line-of-sight for traditional radio communication.

These areas should be marked and known, so they can be avoided in an emergency.

4 - Are your buses too close to each other when loading/unloading?

Here's a simple one: Imagine that your buses needed to evacuate the school grounds ASAP, because that's safer than trying to unload the students. Are they parked so close together that they couldn't all pull out in an emergency? If so, increase the spacing so that they have room to maneuver around each other, if they had to.

There are any number of potential disasters that aren't necessarily covered by traditional school bus safety drills. Are there any your district focuses on? Let us know in the comments!