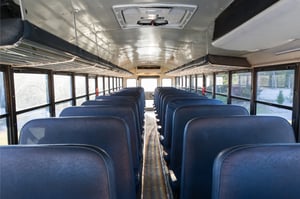 Sometimes it seems like people do things that we shouldn't need to say are completely inappropriate...like trespassing on school buses. Unfortunately, it happens. In fact, in recent months there have been several high-profile cases of unauthorized individuals boarding school buses to harass students or staff. Worse, some districts - such as the Escambia County School District - have discovered there aren't even laws on the books preventing it!

While not the most common threat to student bus safety, school bus trespassing is a legitimate problem that districts should be prepared to confront. Here are some of the things you and your drivers should be aware of.

1. Know (And Perhaps Try to Change) Your Local Laws

Every state and county has laws on the books making it illegal to trespass on school property. However, some of those laws are specific to the point that school buses are not covered under them. In such cases, an offender would have to trespass on the bus and commit some other crime, before they could be prosecuted.

Know your local laws. If they do not currently define school bus trespass as a crime, work to change the law. This should be an easy law to pass.

Another recent school bus trespassing case boiled down to negligence on the bus driver's part. The driver allowed a trespasser onto the bus, even though he would have been entirely within his rights to refuse entry. By allowing the trespasser onboard, and not intervening once they began harassing students, the driver effectively sanctioned the trespasser's actions and made them immune to prosecution.

The driver was fired for this, and rightfully so. Train yours so that this sort of mistake does not happen again.

Another sticking point in the above case is that the school bus had no signage indicating that unauthorized boarding would be considered trespassing. It is entirely appropriate to post signs near the door, or on the steps, warning against trespassing on the bus.

To fully ensure any trespassers can be prosecuted, without grounds for debate, school bus video cameras are the best tool. If you have video footage of the offender, then your district will be in a much stronger legal position. Be sure to have signs notifying people that they are under surveillance, alongside the "no trespassing" signs. That should further deter offenders.

Has your district had to deal with school bus trespassing? What measures did you take? Let us know in the comments below!