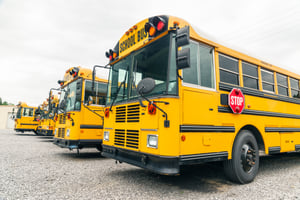 In the ongoing push to move towards ecologically friendly bus fleets, electric school buses are rapidly gaining traction. Modern electric buses have overcome nearly all the problems that faced them a decade ago - they're now as powerful and robust as diesel buses and can have batteries with enough capacity to serve all but the largest of rural districts.

However, there are still issues to overcome, primarily monetary. Currently, electric school buses cost 2-3x what diesel buses cost, and governmental programs to encourage adoption are still limited. Districts wanting to upgrade to electric are facing a hard sell, particularly in lower-income districts.

But what if there were concrete benefits, beyond feel-good environmentalism?  There are a few ways a modernized bus fleet could be good for low-income communities.

It's no secret that lower-income areas tend to have lower test scores - and the old polluting buses may actually be part of that! Multiple recent studies have shown there's a direct link between air pollution and test scores. Even when controlling for all other factors - including monetary factors - students who rode polluting diesel buses had lower test scores, compared to students on pollution-free buses such as EVs.

While it's probably too early to declare outright that buying electric buses will necessarily raise a district's test scores, it looks fairly likely that's the case. That could be a substantial boon to low-income areas in need of better grades.

Another issue with buses in low-income areas is that they tend to be older, and often lack all the safety features found in modern fleets. EVs, on the other hand, are built around safety. The buses themselves are inherently safer, compared to combustion-based vehicles, and they have numerous safety upgrades as well.

"More safety features" by itself may not be a compelling reason to upgrade to electric, but it's a powerful added bonus. Every parent wants their child to be as safe as possible on the bus.

We came across an interesting proposal on School Transportation News: utilizing electric buses as portable emergency batteries. The argument was that since electric school bus batteries typically hold 150 kilowatt-hours (kWh) or more, it would be relatively easy to install connectors that turn them into portable microgrids.

These could then be used in case of power outages or natural disasters, allowing people to charge cell phones or power critical pieces of emergency equipment. This would require significant coordination between the city, emergency responders, and school districts, but it's certainly an interesting idea.

What do you think? Are there any other ways to find "valued-added" benefits to electric school buses that help justify their high costs?