published on September 24, 2021 by Sonia Mastros 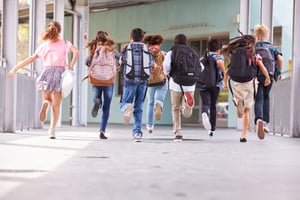 The sad reality is that the bus driver shortage isn't going away - it's only getting worse. The COVID-19 outbreak spurred a lot of people to leave bus driving for other careers or retire if that was an option. One recent study showed that 80% of districts are struggling to fulfill all their bus routes.

So it's no wonder that districts are increasingly looking for creative solutions to the driver shortage. One option that's gaining traction is changing school bell times to allow for fewer buses to run more often.

Is this a viable solution?

While the exact implementation varies from district to district, the basic idea is to stagger starting and finishing bells so that different groups start and end classes at different times. So, for example, a high school might begin classes at 8 AM, while the attached middle school begins at 9 AM.

The immediate benefit here is obvious. A school can effectively carry twice as many students with the same number of buses. Unfortunately, this approach will affect operations across the school and can cause some new challenges to appear. For example:

These are all issues that can be overcome, but it illustrates how changing the bell times is not a quick and easy fix. However, for a district facing a severe driver shortage, this is one of the few solutions that would allow them to effectively stretch their resources while still fulfilling their transportation obligations.

What do you think? Has your district looked into the possibility of shifting your timetable to accommodate more bus routes? Please let us know about your experiences in the comments!