published on September 10, 2021 by Sonia Mastros 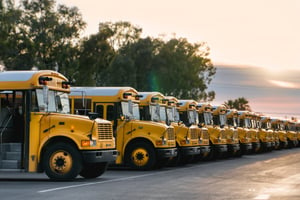 Despite all the economic hurdles of the last year, districts are still finding ways to upgrade their school busses to better, cleaner options. School Bus Fleet recently reported on a California district, Fairfield-Suisun Unified School District in Napa County, which received a state grant allowing them to purchase two propane-powered buses.

At this point, it's almost inarguable that diesel-powered buses need to go away. The questions are, how to make it happen, and which alt-fuel to switch to? Currently, the major contenders for eco-friendly school buses are either propane or electric.

Let's take a look at how propane school buses stack up against electric buses.

Are Propane School Buses the Right Choice for Your District?

Propane is a byproduct of the creation of both natural gas and petroleum refining.  This does technically make it a fossil fuel, which some see as a downside.  However, as long as the world is using fossil fuels at all, propane will be created, so it does not directly contribute to over-reliance on fossil fuels.

For school districts, the biggest argument in favor of propane boils down to costs.

First, propane school buses are somewhat less expensive than all-electric buses. This is largely because propane can use many of the same drive mechanisms as in a traditional diesel bus, while electric requires a fully custom drive train and braking system.

There's also the matter of fuel costs. Propane is one of the least expensive fuels in the United States, and it's plentiful. With electricity prices often fluctuating, it can even be cheaper than buying electricity - although some districts get around that by creating their own power via solar panels or wind turbines.

If a district does need to buy fuel, though, propane has another benefit: its shelf life is effectively unlimited. Stored propane never goes bad. So a district is free to stock up when prices are low.

Finally, there's the matter of range. While the effective range of electric buses has been improving steadily, a propane-powered bus will still run longer and further. This won't matter for urban districts, but sprawling rural districts might struggle to create routes within the limitations of electric vehicles.

Both propane and electric buses have their pros and cons. Has your district recently evaluated the topic? Please share your insights in the comments below!