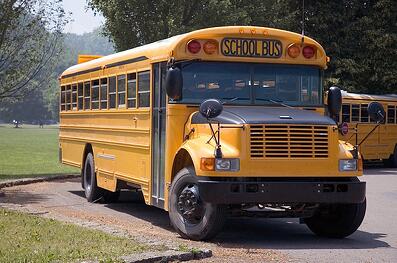 Since schools first started providing public transportation, the costs and difficulties involved in busing students have always been a significant concern. A school's transportation system can be one of the single biggest budget drains on a district, even when it's well-optimized.

Simply creating routes used to be an incredibly complex and time-consuming affair. The old strings-on-a-map approach (which is still occasionally in use today!) would generally take weeks or months to produce even a single set of routes. Tedious and labor-intensive, this process would often take an entire summer of work... only to see the routes get mangled within the first week, thanks to student transfers and other last-minute changes.

In recent years, however, technology has finally caught up with the needs of schools. There are now bus routing software solutions that make bus routing a vastly easier process. These software packages can produce a complete map of routes, even covering thousands of students, in a matter of seconds.

Moving to bus routing software can ultimately be one of the best and easiest cost-saving measures a school can implement. Given the budget crunch most districts are under, it's a viable way to slash your transportation expenditures, but without reducing its safety or efficiency.

In fact, you'll almost certainly increase both, even as you save money.

Optimize Your Bus Routes With One Simple And Affordable Change

Many school systems look on major software licenses as being unaffordable, or requiring hardware investments that are beyond their budgets. Today, however, that's no longer true. Depending on a school's budgetary situation, they could:

No matter which path a district chooses, there are options for bus routing software that can fit into virtually any budget. Then, after the small initial outlay, it's virtually all benefits from there on out.

At heart, transportation routing software operates under the same principles as a satellite navigation unit or Google Maps. The system does a quick comparison of different routes, and then settles on the shortest, easiest, or most fuel-efficient option.

The difference is that modern bus routing systems can do this with multiple – or even dozens – of bus routes at once. Once the system has been fed the complete list of bused students and their addresses, just a few clicks in a simple graphical interface will produce working bus routes/maps within a few moments.

Those maps can then be further refined. Perhaps you want to experiment with changing the number of stops, or how far students have to walk, or try out different routing techniques such as avoiding major highways. These can all be run as hypothetical scenarios, with the system creating map after map according to the criteria you select.

Further, such a system can adapt quickly to changing circumstances. If a student moves or transfers, an updated route for that student's bus can similarly be made within seconds, and then it immediately becomes available for the drivers to see. This can vastly reduce the transportation stresses during the first week of school.

The immediate benefits of bus routing systems are clear, in terms of reducing the workload on your transportation administrator. However, going forward, there are multiple other benefits to this system:

Is It Time For A Transportation Upgrade?

If it's been years since your district has made a major change to its bus operations, now may be the time to make that change. Modern software packages are affordable, easy to use, and will pay off for years to come.

Orbit Software is dedicated to ensuring that every child completes every bus route in absolute safety, and our software products make that happen. To learn more, or to see a live demo of BusBoss in action, just contact us for more information!