Of all the “cargo” on our nation's roads, none is more important than the millions of students who

ride school bus services every day. It's the single largest -and most dangerous- logistical challenge that faces a modern school district.

Every student needs to be in class, on time, safely... every day.

Ten Tips On Improving Transportation Safety In Your District

There's some controversy over how much good seat belts can do inside a school bus. Most studies have concluded they slightly reduce danger, although at such costs that it could require tens of millions in upgrades to save a single life. However, if your district deals with a higher-than-average number of troubled or special-needs children, additional safety restraints inside the bus are worth considering.

When building your maps and bus routes, take some time to map out areas of your town where you don't want students to be. Whether it's areas of known drug activity, or registered sex offenders, you can often best protect your students by keeping their routes far out of harm's way.

There's a balancing act in terms of time and money when it comes to laying out your bus stops. However, in terms of student safety, you want their walks to and from the bus stops to be as short as possible. This is an area where good bus routing software can help a lot, since it can redraw maps based on these walk lengths within moments.

If “losing” kids on your bus routes is a concern, RFID-enabled student ID cards may the solution. When combined with a sensor in the front of the bus, the system will automatically note all students getting on or off the bus. If a student is getting off at the wrong stop, it can alert the driver before the student is more than a few steps away.

If your bus is involved in any sort of incident – even if it's nothing more serious than a blown tire that needs replacing – you need to know where that bus is to be certain there's no more danger. Having a GPS system in your bus allows you to always know where it is, and if there's any sort of incident, response vehicles can be dispatched within moments with an accurate destination.

Many schools still rely on hand-filled reports from drivers or maintenance staff to keep track of their bus performance, but this is a highly inefficient (and often error-filled) way of handing bus maintenance. If you have a GPS system in your bus, this can feed directly into a database which keeps track of every possible statistic.

Even a careful driver might not even notice a 10% drop in fuel efficiency, but a “smart” database would quickly spot such a clear warning sign of maintenance issues, before they became a serious problem. 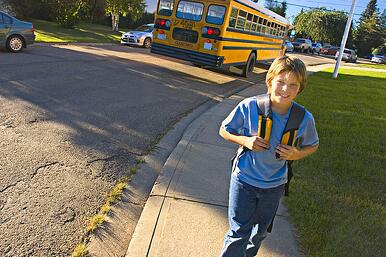 Another benefit to GPS is that it gives you practically an inch-by-inch breakdown of your drivers' behaviors during their bus routes. There's no need to blindly trust your drivers are following all the rules of the road. If they're cheating stop signs, or ignoring speed limits, the system can alert you to problems with their driving that could potentially endanger the students onboard.

(On the other hand, rewards for good driving will encourage drivers who drive responsibly!)

Having cameras in your buses ultimately help protect students in multiple ways. First, should there ever be any question of misbehavior by anyone on the bus -even the driver- the video record will show the truth. Secondly, if there's a camera in the back of the bus, it can feed to a video screen near the driver, allowing them to keep a better eye on kids in the back.

To keep your kids safe, accurate record-keeping is a must. If a student's address changes, or their parents' contact numbers are updated, it's vital that this info be available throughout the system to anyone who needs it. After all, drivers can't run their routes properly if they don't have accurate information.

A centralized student database ensures every change is instantly seen everywhere it's needed.

Finally, remember that no matter how “smart” computers get, they can never replace an intelligent and experienced human being. Your Transportation Administrator should have the power to overrule the computers, if necessary, since no piece of software will ever be able to handle every possible contingency that might happen during a bus route.

Orbit Software is here to ensure schools protect their precious cargo every minute they're are on the road. To learn more, just contact us with your district's needs!