published on February 28, 2014 by Sonia Mastros

So, something that buys your district more time is ultimately bringing you everything a school 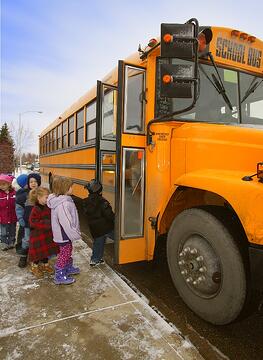 wants more of, however they can get it. More class time. More state returns. More efficient operations.

That's why we're heartily encouraging customers of either Orbit BusBoss, or Pearson PowerSchool.  The one-two punch of BusBoss and PowerSchool give you the gift of time.

In the old days, simply creating a single set of bus routes by using maps, strings, and pushpins would take weeks, if not months. Worse, a streak of last-minute enrollment changes could render those maps useless before the school year even begins! BusBoss, however, can create a full set of routes within seconds, and update them instantly whenever needed.

Do you have too many stops on your routes? Do different buses cover the same territory? Is it possible to cut buses entirely?

Every needless hour your buses are on the road can be hundreds of dollars wasted. In our experience, BusBoss often pays for itself within only a few days of implementation, simply through the bus-time savings.

A centralized database makes any records lookup a snap.  With no more paper files, and a database that ensures all records are updated everywhere at once, even the most routine of office tasks will take far less time.

Students go truant all the time, and if it happens in the middle of a school day, it can turn into a logistical nightmare.  With BusBoss and PowerSchool, however, you'll know the schedule for every student and be able to use RFID tracking to find them on-campus within seconds of being reported missing.

PowerSchool is designed to be used by schools around the world, while allowing them to successfully report whatever data is needed by their local districts. More than 200 customizable reports means that no matter what data you need, it can be put on paper in moments or – in some cases – even transmitted directly to government databases.

Now, no one likes to say they dislike talking to parents... but we've usually got better things to do. Since Pearson PowerSchool puts information where parents and students can get it for themselves – in Cloud-based online servers – they won't be calling nearly so often.

PowerSchool saves your teachers' time as well!   The same system is used for grades, disciplinary action, and any other actions a teacher has to document.  Every minute of classroom time is precious. PowerSchool adds minutes to every class by reducing the time teachers have to spend not teaching.

PowerSchool uses a web-based portal, and additionally, native iOS and Android apps are available as well. Administrators, teachers, and even students are no longer tied to using “official” desktop computers. They can access the system from effectively anywhere, at any time.

If a student falls ill, for example, it's vital that you get in touch with their parents as soon as possible.  Since PowerSchool keeps a full database of contact information, it can contact the parents for you! There are multiple options for reaching guardians, and reduces the time your staff spends dialing phone numbers.

Should one of your buses or other official vehicles suffer a breakdown or other incident, onboard GPS systems allow their location to be pinpointed instantly.  This allows you to greatly reduce the time it takes to send assistance to the bus, and get your students where they need to be.

Full calendars for your school district, or any particular set of students, can be quickly created based on existing records.  The system can even handle emailing to the contact addresses on file whenever there are scheduling changes, such as early dismissals!

From choosing buses, to plotting routes, to tracking every student who'll attend...  the combination of BusBoss and PowerSchool truly shines when it comes to field trips and other special events.  Field trips are faster to set up, easy to reschedule so there's far less chance of incidents before the trip or once on the road.

So, if your district is still trying to use multiple software systems – or, worse, paper records – why don't you investigate the benefits of a BusBoss\PowerSchool system? For all the power you gain, the ability to create more time might be the most important.