What Do You Use A Student Tracking System For?

published on December 13, 2012 by Sonia Mastros

You've probably been aware of a debate in recent years over student tracking.  An increasing 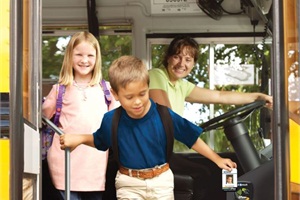 number of schools have begun issuing their students mandatory ID cards to track them throughout school property, or even on the school bus.

The two sides of the debate aren't hard to figure out.  On one hand, you have a robust collation of school administrators, managers, teachers, and parents who all have a very real interest in ensuring that they know where the students are at all times.  On the other hand, it raises privacy concerns and potentially leaves students with even less time that's truly "to themselves."

Well, while we sympathize with those worried about the privacy implications, the plain truth is that a student tracking system works.  It helps keep students in classrooms, and it most certainly helps you ensure that students are properly using your busses.

Basically, it makes it far harder for you to ever "lose" a student, and far easier to find them again when you need to.

How A Student Tracking System Works

The system itself is simple.  The students are issued mandatory cards which are used to track them electronically.  Magswipe or barcode-based cards are still occasionally in use, but the move has overwhelmingly been towards the use of Radio Frequency Identification (RFID) chips.

These tiny radio transceivers are only about the size of a grain of rice, and only cost a few cents each to manufacture.  They can be automatically recognized by any RFID reader from a distance of several feet.  Each RFID chip is, of course, encoded to be unique to each student.

Then, with a network of similarly-inexpensive readers, it becomes simple to track the movement of every card and therefore, presumably, its owner.

By combining student tracking software with a GPS tracking system on your bus, you can create a situation where you can know within a matter of a few feet where every student is, at all times.  By putting an RFID scanner on the bus, you'll know every time a student gets on and off.

While mistakes can still happen, such as a student accidentally leaving their ID on the bus or even at home, by and large this makes losing track of an individual extremely difficult.

With this combination of GPS and student ID tracking, you can:

•   Warn busses of missing students before they leave the school.

•   Instantly and honestly reassure worried parents if a bus has been delayed.

•   Know if a student gets off at the wrong stop.

•   Help locate a missing student via RFID in the event of a kidnapping, truancy, or similar situation.

•   Keep closer tabs on students during field trips and other outings.

Look To More Tracking In The Future

The privacy advocates are unlikely to get their way on this one.  The practical results from a student tracking system are overwhelmingly positive, and the perceived downsides are nebulous and ill-defined.  From a sheer nuts-and-bolts perspective, student tracking protects children while cutting your costs and liabilities.  It's win-win all around.

If your district has been talking about integrating student ID tracking, this would be a good opportunity to weigh in on the discussion.  Tell them about the benefits tracking  brings to the bus system.  Plenty of other districts nationwide are having the same conversation, and most of them are coming to the same conclusions.

Have you been involved in student tracking policy discussions?  What concerns about the system were raised, and how were they addressed?