Even though it has gotten a bad reputation and caused a lot of controversy, GPS vehicle tracking is simply a way for companies to ensure the safety of their drivers. Despite what many people think, companies do not impose GPS tracking on their drivers to invade their privacy or convey distrust of the employee by the company. 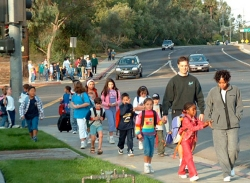 School  bus companies are interested in protecting both their drivers and the students they are driving to and from school everyday. This is why many school buses are now equipped with GPS tracking. In addition to providing a safe mode of transportation for students, the tracking of school buses is also a way to make sure the bus drivers are doing their job properly. Bus companies can also use GPS tracking to determine if any of their drivers are speeding. It also saves the  bus company money because there is no need to worry about a brand new bus driver getting lost during the course of their route, which means the company also cuts down on the cost of fueling the buses.

The Facts Parents Need To Know

Having a school bus running late can be very stressful and inconvenient for both students and parents. GPS tracking allows the bus companies to determine how far away a bus is from its destination if the bus is running late. GPS systems can record the amount of time a bus sits in traffic and the bus companies use this to adjust the bus's route if necessary. GPS vehicle tracking can also monitor when the bus door is opened and how long it stays open for. The bus companies also use GPS tracking to uncover incidents that result in the company spending more money than necessary, such as buses that are not used to their full potential, bus routes that are deemed inefficient and an excessive amount of time in which the bus is idle. The tracking system can also inform the company if one of their drivers is making unauthorized stops.

In Tennessee, GPS tracking devices were installed on school busses after several children had either been left on the bus at the end of the route or let off at a stop that was not theirs.

In addition to all the other benefits of using GPS tracking, bus companies have found that they can save money using this technology. GPS vehicle tracking for school busses save the bus companies money on fuel, overtime paid to their drivers and communications between bus drivers and the dispatcher.

A Study Of GPS Tracking

Vehicle Routing software is also available with integrated GPS Tracking functionality.  This allows the districts the option to receive alerts whenever their drivers are deviating from their scheduled routes.  Depending on the situation, police can be notified right away to ensure students are safe.

Despite the fact that many people feel using GPS tracking technology on a company vehicle is an invasion of privacy and a sign of distrust, many companies have embraced the technology because of all the benefits they receive. In an increasingly dangerous world, school bus companies are especially interested in protecting the well being of the children on the bus, as well as the bus drivers themselves. Parents all over the U.S. have gotten behind the idea of using GPS tracking technology in school busses. It is a win-win solution for both the parents and the bus companies. GPS vehicle tracking has come far since the inception of the technology.