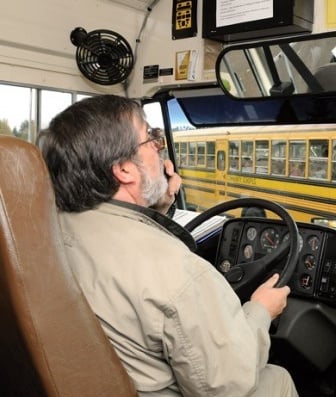 Every day you trust them with the lives of your children.  There are approximately 480,000 buses transporting students.  This means there are at least 480,000 bus drivers.  In reality, there is more than that because each school district needs substitute bus drivers.  With half a million drivers, there’s likely to be some that are better than others.  On average, each bus transports approximately 50 students.

School Bus drivers have many responsibilities.  Their primary responsibility is to the safety of the children on the school bus.  It is imperative that drivers concentrate on the road.  A momentary lapse in attention can cause a serious traffic accident.  Children on the bus can become a distraction for the bus driver when they become unruly.

If you are the parent of a school aged child that rides a school bus, please sit them down today and ask them about the behavior of the children on the school bus.  If parents get more involved with the behavior of children on the bus, perhaps we can reduce the distractions for the driver causing a safer environment for our nation’s children.  Nobody likes to think about their child becoming a troublemaker, but consider that something simple like yelling and jumping between seats can be a distraction for the driver.  It is unrealistic to expect our children to ride the bus facing forward in silence.  School bus drivers don’t expect it either.  Peaceful conversations among school children do not pose a distraction like yelling and jumping between seats.

Lastly, please be aware that the truth is not always black and white.  There are times when a child may exaggerate events that make the bus driver seem like a monster.  Statements like, “The bus driver yelled at me for no good reason” could also be interpreted as, “The bus driver told me to stay in my seat while the bus is in motion”.   Both versions of the event could hold elements of the truth.  Did the driver talk to your child or did she yell at him.  Perhaps the tone of voice was actually somewhere in between.  Was the child jumping between seats, or did the driver see another child and assume it was yours.  Before getting upset with the driver, please learn all the facts of the situation and give the driver the benefit of the doubt.

Bus drivers have the child’s safety in mind.