published on November 18, 2011 by George Mastros

The use of school bus passes is becoming more prevalent over time.  Bus passes are primarily used for students to get on their assigned school bus.  They are usually required when students are expected to pay for their school bus transportation.  Printing bus passes cane be relatively expensive, but in a “pay to ride” situation, they are required so that drivers will know who should and should not be allowed on the bus.

School bus transportation is expensive.  Numbers vary, but the consensus is that it costs approximately **$690 to transport a student per year.  That’s approximately $3.80 per day or $1.90 per trip.  Most schools that charge students for transportation will subsidize part of the costs.  Even though the school subsidizes the cost, the money must come from somewhere.  Some states will reimburse a fraction of the transportation costs, but the remainder comes from school taxes. 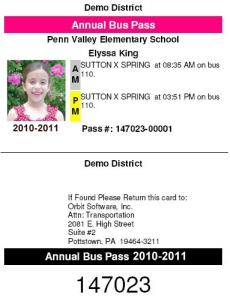 The average yearly cost for transportation is based on an average of 54 passengers per bus.  Obviously we cannot put more students on the bus than what the bus accommodates.   Most school districts utilize a two tier system where the bus is used twice in the morning (once for elementary school and again for secondary school) and twice in the afternoon.  The logical conclusion is that there must be a lot of empty seats on buses.  By using School Bus Routing Software like BusBoss, you can easily optimize your routes to minimize the number of buses required, the travel time and the travel distance.  All of these things will lower your transportation costs which is likely to lower the cost of bus passes.  BusBoss Professional and Enterprise have functionality that allows you to optimize your fleet of buses.  All versions of BusBoss allow you to display multiple routes simultaneously, looking for route overlaps and inefficiencies for opportunities to optimize.