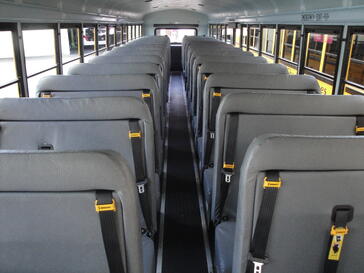 Each year school buses transport approximately 24 million students to and from school, covering more than 4 billion miles.  There has been much debate over whether seat belts should be required on school buses.  At first thought, the answer seems to be an obvious yes.  Seat belts save lives in cars, so it would seem logical that seat belts in buses would do the same.

There are many safety features already built into the design of school buses to ensure passenger safety.  The National Highway Transportation Administration (NHTSA) has determined that there is not sufficient reason for a Federal mandate to be issued for seat belts on large school buses.  Their position statement includes that “School bus transportation is one of the safest forms of transportation in the United States.  We require all new school buses to meet safety requirements over and above those applying to all other passenger vehicles.  These include requirements for improved emergency exits, roof structure, seating and fuel systems, and bus body joint integrity.  These requirements help ensure that school buses are extremely safe.”

A design called “compartmentalization” is required by NHTSA which is a crash protection that is provided by a protective envelope consisting of strong, closely spaced seats that have energy absorbing seat backs.  However, seat belts can be an additional safety measure that could make a huge impact in helping to keep students even more safe and secure on school buses.

US regulations only require seatbelts on small school buses; those under 10,000 pounds.  Currently only six states, Texas, California, Florida, Louisiana, and New Jersey require all school buses to be equipped with seatbelts.

IMMI, one of the leading providers of seatbelts in the school bus industry has conducted testing and research has concluded that in general, lap shoulder seatbelts can reduce injury and death by 50 percent.

Those opposed to seat belts point to the fact that seat belts add additional costs and take away some seating space.  There are also opportunities for students to use the heavy belt buckles as weapons to injure other students.  It will also be impossible to ensure that all students keep their seat belts properly fastened.  Also there are concerns that students may not be able to unfasten their seat belts in the event of a crash, accident or evacuation in case of an emergency.  Students may also panic and even get trapped by their seat belts.

Requiring the use of seat belts in cars, but not in school buses sends mixed messages.  Teaching children to buckle up in any vehicle should be a consistent message.

School bus transportation is one of the safest forms of travel and crashes are rare, but if seat belts could save just one life wouldn’t they be worth it?  Everyone involved agrees that student safety is a top priority and everyone must come to an agreement on ways to protect them.  The children are in fact our future.